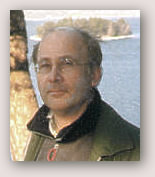 My name is
Gunnar Sommestad.
My work has been around
on the Web since 1995.

In my young days, "social engineering" in the Welfare State was as big as the computer revolution has been in the last years. Initially, I worked ten years in government, calculating the Gross Domestic Product and running studies to project future trends. I left this work around 1985, and I have since made my living by computer programming. The democratic and anti-authoritarian revolution brought by the Internet is definitely the big thing in my life. It is a dramatic event in world history, like the fall of the Berlin Wall, and something I probably had always been waiting for.

In 1997 I made a program with a database concept that had been in my mind for at least fifteen years, "The Literary Machine." It has a steady download frequency of at least 100 a month since 1999. I get letters from people who are enthusiastic about it. Since the end of 2001, I am cooperating with Kathy Krajco to explain the program.

I wrote The Literary Machine primarily to help me write. I own a Rocket ebook (from the old Nuvomedia days!), and I follow developments in the electronic publishing industry with great interest. For the last few years I have also run a "one-man ezine" in which I publish political comments, philosophical essays, poetry and novels. Its steadily growing archive contains at least 600 pieces  all in Swedish though.

For a living I work with computer programming. I have moved to the new Delphi .NET development platform and in particular I work with migration of old Delphi code to .NET.

Logic takes care of itself; all we have
to do is to look and see how it does it.