I worked with National Accounts and energy crisis fact-finding in Swedish government agencies around 1980. 2006, I took a second turn at Statistics Sweden after 20 years as a PC developer. This time I manufactured NAMEA “climate crisis tables”. NAMEA is an input-output implementation of national accounts, extended with salient Environment data. The EU Statistical Office in Luxemburg plays a leading role in coordinating member state data work . The member countries send their personnel to Luxemburg. A three year stay in Luxemburg can be nice and is of great importance for the establishing of tight contacts between countries.

NAMEA data is statistical data that requires a mind that has extended itself with academic modeling and economic theory. Very few have. It is like GDP. It is quite useful, but it has taken a long time to  get a general understanding  of it.

Some want it green. I think that they are lost in their academic ponds.

The importance of the late Hans Rosling comes here. National statistic agencies and international organizations need evangelists that will read and analyze the truckloads of socioeconomic data that is produced. The task requires both understanding of theory and understanding of the quasi-world that creates it all. I think that Hans Rosling was on the right track. I can imagine him having a TV program for statistics consumers, where he recommends some statistical publications and throws some others in the dustbin.

I have worked with Anders Wadeskog. He is probably is the best input-output data cruncher in northern Europe. We have produced tables. Any size and mixture.

In my first period with Swedish future modeling 1975-1985 I worked with transport energy policies, making forecasting/scenarios. I also made forecasts for wood and peat. These energy sources had bad pollution characteristics, but that was not an issue then. Christer Öman led this work – a very modest man of sound judgment. This was a time when nearly all government agencies claimed to be the true energy policy authority and they swarmed like wolves all over the place. However, the white paper for the 1979 nuclear energy referendum was written by us. Sweden managed to transform to zero oil in all sectors, except transportation. This was no great accomplishment since we have plenty of hydro power and equally much of nuclear power.

Coming back 2006 to climate change-aware folk was a deja-vu journey. To save energy and remove atmospheric pollution seemed very alike, only that some truths were reversed. And some questionable accounting irked (like wood being 100% renewable.) Young people will not ask the old man or history for advice.
And, when we made projections and forecasts back in 1979, year 2000 appeared as very far away in unknown mists.

Now 2000 was disappearing behind and the world was still approaching doomsday, but with a new diagnose.

The strategies for the future repeated old patterns 1) Tell the truth if you can 2) Exaggeration can never be wrong. People must be shaken! 3) What is the fuss about? We have seen no proof, only manipulation and biased reporting! 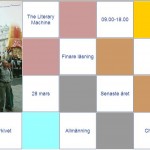